Understanding how it works

The skin is the largest and most visible organ in the human body, as well as it represents approximately two square meters of surface area and almost one-sixth of our body weight. Vital to health, the skin is the first protective layer of our body from the environment and bacteria. Thus, it acts as a barrier and is the most affected by external elements and aggressors. The skin plays a major role in keeping us healthy and, in turn, we need to ensure its health for the optimal function.

As the most visible part of our body, healthy skin can have a significant impact on wellbeing along with self-esteem. Healthy skin is attributed to a combination of genetics, lifestyle, and environmental exposure.

The skin consists of three distinct layers: the epidermis, the dermis, and the hypodermis. Genetics, lifestyle, and environmental exposure impact each layer differently in terms of its health and how it ages. 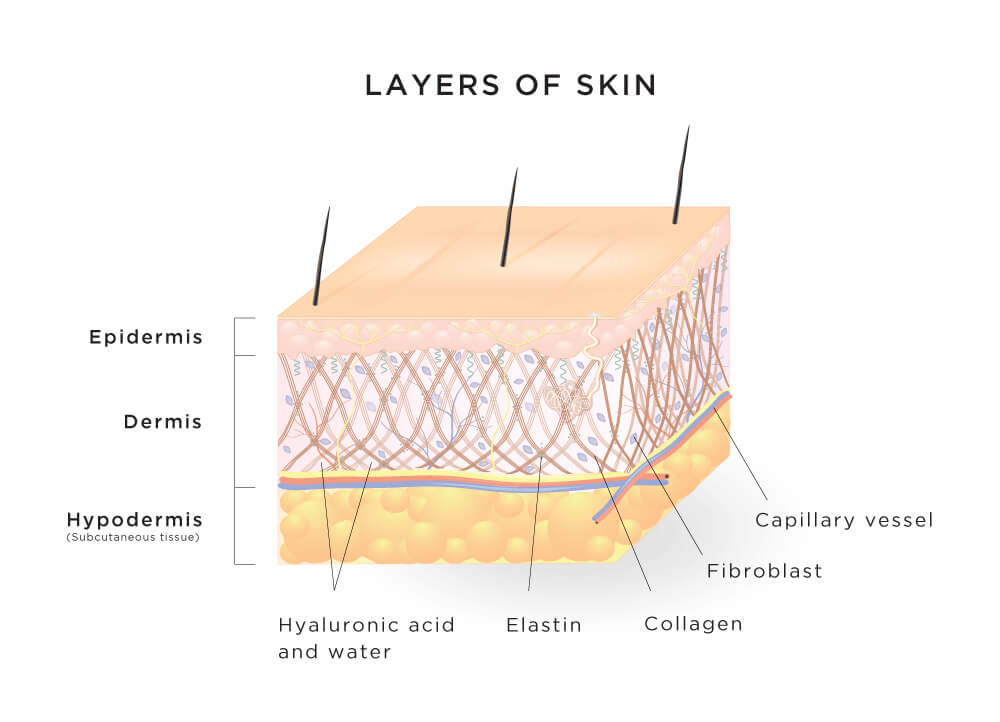 The epidermis is the outermost layer of the skin that protects us from the environment, toxins, pollution, bacteria, and infections as well as regulates the amount of moisture released or retained by the body.

The hydrolipidic film covering the entire surface of the skin is mainly composed of sweat, sebum, and water to defend against bacteria and act as an external protective barrier. It also helps the skin maintain its suppleness and moisture. The layer under the hydrolipidic film, known as the stratum corneum, consists of dead skin cells where desquamation occurs; the natural process in which skin cells are created, sloughed away, and replaced about every 28-32 days. The epidermis primarily contains keratinocytes, the cell that produces keratin protein fibers which is responsible for the strength and flexibility of the skin. As the epidermis is the most visible, the aging process is characterized by an overall thinning, hyperpigmentation, uneven tone, dullness, and rough texture.

The dermis is the middle layer between the epidermis and the hypodermis, also known as the corium. It’s the thickest layer, made up of connective tissue, and gives structure to the skin through the matrix of collagen and elastin fibers that provides strength, elasticity, and firmness. This matrix also retains water which maintains the volume of the skin. The natural aging process particularly impacts the dermis as collagen and elastin production slows and thus, the skin’s integrity is compromised leading to sagging and wrinkles.

The hypodermis, or the subcutaneous tissue, is the innermost layer of the skin. It mostly consists of fat cells, blood vessels, and nerves. Its main purpose is to store fat, insulate the body, act as a cushioning layer, and connect the epidermis and the dermis to underlying tissue and supporting structure. While the hypodermis is the innermost layer, it can impact the way aging affects the skin, particularly on the face and neck. With natural aging, the volume of facial fat decreases and there is less supportive tissue to maintain the elasticity of the skin.

Previous: How To Prevent AgingNext: The Natural Aging Process